Step into the world of a TV News Anchor with DaVonté McKenith as he shares highlights of his career and how PR professionals can better work with the industry.  McKenith is from Charlotte, North Carolina and graduated from Appalachian State in 2012. Shortly after, he landed his first on-air job in Nebraska and has since moved back to NC to become a TV News Anchor for WXII 12 News in Winston – Salem.

How did you find yourself as a reporter?

To be quite honest, I never knew it was meant to be! I switched my major 4 times in college. The first was computer science. We got into discrete math, and I about had a conniption and thought adding letters of the alphabet was inhumane. HA! Then I switched to secondary education, then print journalism, and finally to broadcast journalism.

Tell me about your first TV job.

My first TV job was in Kearney, NE at KHGI. I was a weekend producer and reporter. I produced the weekend shows and reported three days for the night shows. Your first job is where you learn anything and everything and that I did. It honestly has made me a better anchor and newsroom team player.

What brought you to WXII 12 News in Winston-Salem and what is your favorite thing about the team your working with now?

I came to Winston-Salem to be closer to home and to also work for a team I’ve heard so much about. My favorite thing about the morning news team I love is we love a good laugh. That morning show is fun for viewers because we have fun! We are friends in front of the camera and behind the camera. What you see is what you get — truly & that’s a good thing to have for morning television.

How are your needs as a reporter different from other mediums?

As a television reporter, it’s a lot tougher. We are in the business of visual. If we want a story, we have to figure out what can we use for video unlike a newspaper or magazine, they can pick up the phone and get their interviews (compared to us begging for someone to go on camera). It’s intense.

What do you think is the maximum # of pitches a PR pro should send you a week?

From the same company? No more than 2, unless something isn’t planned or scheduled. Otherwise, no more than 2. But, we understand some weeks aren’t “normal” …at all.

Should pitches always align with your editorial calendar, or are you open to new story ideas?

We are always open to new story ideas. It will help the enterprising — which stands us out from the competition. If you have something beyond the press release, find a reporter you enjoy and trust, and let them know!

What do you look for in a story?

Character. Yes, city council might be installing new lights down ABC Street. However, who will those lights benefit? Find that character and tell their story.

Tell us about your career goals, who have you always dreams of reporting for?

If I could interview anyone, it would be…

Hoda Kotb. That woman is a woman of GOLD. She is a class act and I would just like to know more about her, her journey, and how she’s able to do all of what she does. It’s amazing. She’s another person I look up to.

Who do you most look up to in the industry?

I love Terrell Brown with ABC 7 in Chicago. His charisma and anchoring style is one of the best in the business.

If I am not reporting, I am…

Listening to music, hanging with friends, and just relaxing. I love to be social and I love my alone time. It just depends on the day. However, I am a people person. I can’t be stuck in one place too long. 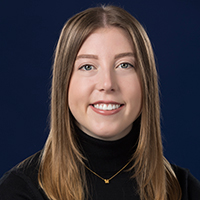